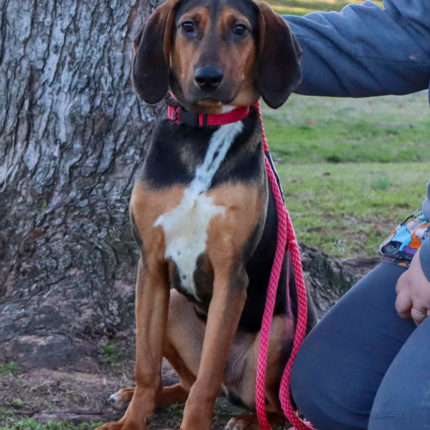 Caleb is a beautiful 7 month old Coonhound puppy. He came to rescue from a shelter in Northern TN. He had been dumped there basically due to “failure to thrive”. An x-ray revealed that he had a diaphragmatic Hernia… a hole in his diaphragm, and most of his abdominal organs were up in his chest cavity. His intestines were wrapped around his heart. We took him and operated on him. It was a very tricky surgery. Caleb’s heart stopped beating twice while he was on the table.

Well, angels were watching over him that day, and he has made a complete recovery and is now a typical puppy and loves to play, snuggle, nap romp, eat and have the time of his life. He has grown and gained a ton of weight, and now weighs close to 40 lbs.

Caleb is the happiest boy and loves his humans and other dogs. He also loves cats, but they may not appreciate his bouncy play. He should go to a home with dog savvy cats only. Caleb is looking for a family to love and will make a superb family pet.

If you are interested in adopting this dog, please apply online, at https://bigfluffydogs.com/adopt/adoption-application/, and then reach out to [email protected]