Lacey is all ready to go. She is permanently scarred, but she is the happiest dog alive. 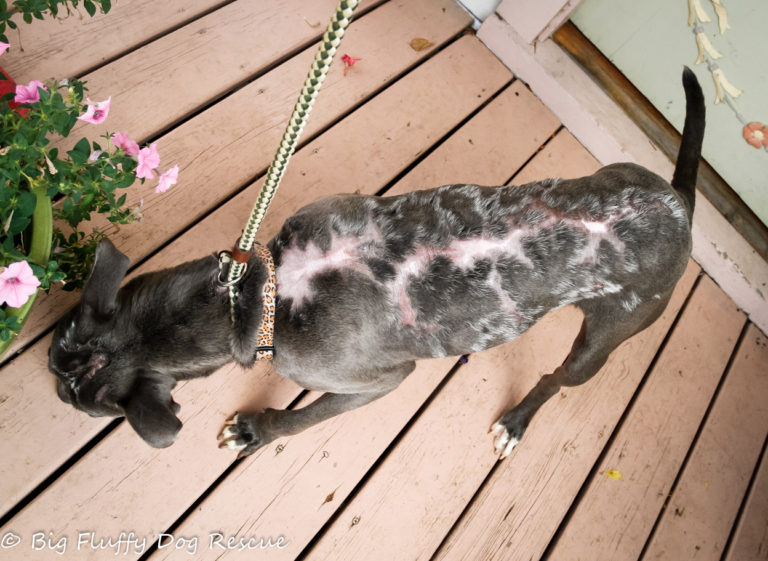 We need help again. We see many horrific things. It is bad enough when accidents happen and you can chalk it up to bad luck. It is another when we believe that someone harmed a dog on purpose. This weekend, we took in not one, but two, dogs from the Memphis shelter that were horrifically burned by chemicals. Both were strays and they came in to the shelter on the same day. The little hound mix was burned on her genitals and down the inside and outside of her leg. Given the pattern of the burn, it would appear that the dog had to have been laying on her back to get burned that way. The pit mix puppy was burned from her head all the way down her back to the tail. I initially thought this dog might have been burned by someone putting a solvent on the back for flea control which we see sometimes. However, the extent of the burn and the coverage of the burn make me wonder.

This is the back leg of Cagney as we are calling her. She is burned to the muscle.

This is what has me worried about the potential for something more sinister:

This is not a location one gets accidentally burned in.

The other dog we are calling Lacey and she is just a seven month old pit mix puppy:

After debridement, this is what she looks like and how much tissue she lost:

Both of these dogs arrived in excruciating pain and the first order of business is getting their pain managed and the wounds cleaned up. Cagney is likely going to need skin grafts. Both are hospitalized and will be for the foreseeable future.

If you would like to donate to their care, you can do so here: https://www.paypal.com/cgi-bin/webscr?cmd=_s-xclick&hosted_button_id=R94DPJG6FKQVA.

We have reached out to the Memphis shelter to ask them to investigate and they have indicated they will try. Someone, somewhere has to know how this happened and who did it, and we would urge anyone with information to contact the Memphis Animal Shelter at (901) 636-7297. Please spread the word.