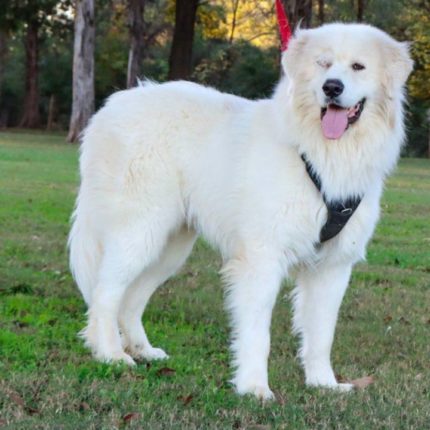 Meet Hogan. Hogan was rescued from Duck River in August. As you can see, he was on a pylon under the bridge in deep water. Animal control officers swam out to rescue him and they got him to shore. We pulled him from the shelter shortly after his harrowing trip to safety and now he’s a big fluffy. He came to us missing an eye due to what we believe was an untreated infection, but his missing eye doesn’t bother him one bit.

Hogan is all healed up and ready for a forever home. He is good with all dogs and people as long as slow introductions are done first. He can be a vocal player (meaning sometimes he sounds like he’s growling and he will bark a little.), but he doesn’t mean any harm. He is a lot more confident with other dogs around, so we would love to have him go to a home with other dogs. He was afraid of the cats we introduced him to, so we think he will do just fine with them.

He doesn’t play with people a whole lot but he’s recently learned about toys and they are his jam. Because he is still figuring out that life is to be enjoyed and not feared, we suggest no kids under 12. He will also need a fenced yard and preferably someone that has time and patience to work with a fearful dog.

If you are interested in adopting this dog, please fill out an application then email [email protected]