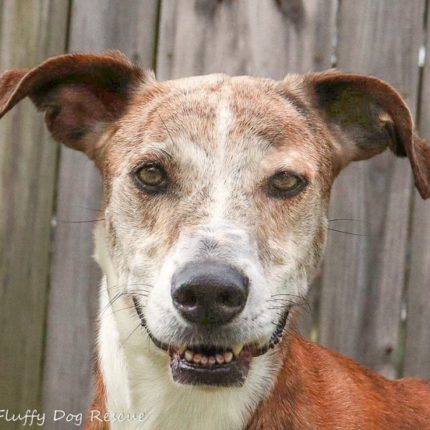 Connor is a 6 year old, 63 pound greyhound mix. You are probably wondering why Big Fluffy Dog Rescue has a greyhound mix, and truth be told, me too. That said, this is an amazing dog and whoever dropped him at the shelter is missing out on an awesome dog.

Connor knows a million commands. He can sit, lay down, shake and so many other things. He walks perfectly on a leash and rides like a champ in the car. He is fantastic with people and has never met a stranger. He is also house trained and doesn’t mind being in a crate. The only thing he does not like is being poked by a vet and I kind of don’t blame him. He didn’t even get taken out to dinner first before the themometer was used in a rather invasive manner.

Connor is dog friendly but is much more interested in people than dogs. He would do fine placed with other dogs or as an only if someone without dogs just fell in love with him. Connor is not good with cats and needs to be placed in a home that does not have cats. He would be best placed with active people because he loves walks and being outside. He is a sight hound which means he will chase small woodland creatures and he would be best in a fenced yard.

If you are interested in adopting this dog, please apply online, at https://bigfluffydogs.com/adopt/adoption-application/ and email [email protected]