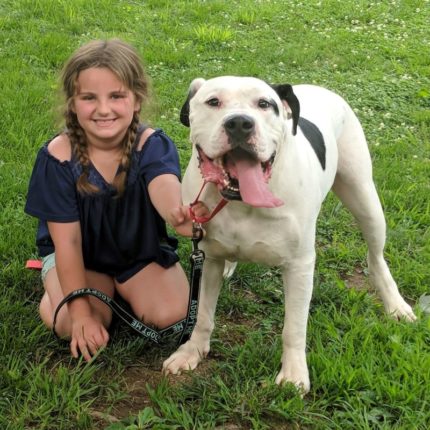 First and foremost this is what you must know: Brock is a 112 pound hunky meatball. Brock spends 22 hours a day in bed, 5-10 minutes per day playing with his eviscerated toy squirrel carcass and the rest eating/doing his business outside. Other dogs are to be played with. Cats and small dogs/puppies are not OK with him and he does not trust horses – anything that large is up to no good.

Brock is happiest when we are binging Netflix and avoiding the world from the comfort of our bed. He regularly implores me to spend more time in bed and I’ll admit I’ve never regretted turning in my adulting card for a good snuggle with Brock. Brock came from some pretty piss poor past circumstances where he was 35 pounds underweight, had a broken back and a bullet in his bum. His back has had a nothing short of miraculous healing but he still doesn’t want me to bump it when kicking about like a toddler in my sleep (this is called guarding and likely a memory of the pain he once felt). He lets out a hearty “watch it woman” anytime I nudge him in that area, then we go back to sleep and dream of new ways to torture the people who are responsible for ever having wronged this magnificent creature.

Brock is a little leery of new people coming into his home and takes a couple of days and a couple of cheeseburgers to warm up to guests. Out in public, he’s sweet and friendly to everyone and people cannot resist squishing his flabby face. Brock currently lives with two children ages 7 and 10 and he loves them dearly. When he gets into his moods to play they know to provide him his eviscerated squirrel otherwise their arms seem like a good alternative to him. For this reason, I would say older children would be best The kids in his foster home are used to being chewed on but most children would take offense to being an eviscerated squirrel substitute.

Brock would love a fenced in yard to ramp around in for his five minutes per day but a dedicated leash walker is also sufficient as that’s what he is used to. He doesn’t have a whole lot of energy so I count that as a
bonus . He is not trustworthy off leash, I don’t want to talk about how I know that….my neighbors probably would though and they thought it was hilarious. I

What makes Brock happy and what his absolute favorite thing is HIS person and the time spent cuddling. He is 1000% housebroke, not a marker, hates the crate with the fire of a thousand hells but is completely trustworthy and non-destructive left out loose. Brock has zero issues with separation anxiety, he chooses to pass the time napping.

Brock has so much love to give. When he came to in to rescue he was a shell of a dog but his faith in humanity has been restored, he found his joy and he is a new dog literally inside and out! We want the world for him and the moon and the stars while we’re at it. Given his history, applicants will be put through the gauntlet.

If you are interested in adopting this dog, please apply online, at https://bigfluffydogs.com/adopt/adoption-application/ and then email [email protected]