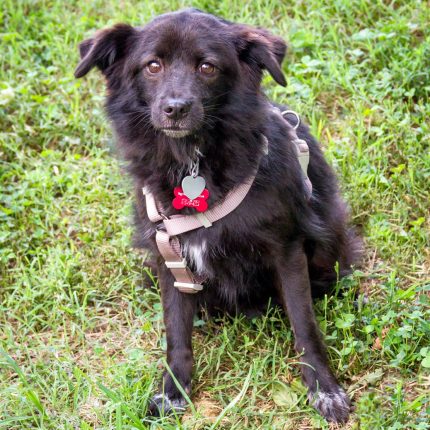 Agatha came to us from a hoarding case in Georgia with her friends Laurie, Serena, and Raven. Their elderly owner apparently died and it took a while for that fact to be discovered. They were four of thirty dogs that were abandoned when their owner died. These girls were the last four left on the property after rescue had been found for the other dogs there. They aren’t big, they aren’t really fluffy, but they are dogs, so we said yes. These dogs were locked inside a house for who knows how long and it is good to see them outside enjoying a day with their nose in the air.

These girls are incredibly sweet, affectionate dogs especially considering that their lives had been spent with very little socialization. Agatha is believed to be 6 and a spitz aussie or something like that as she weighs in at 23 pounds. When interacting with Agatha, it is apparent that she is very timid and basically afraid of the world. Despite her fear, Agatha loves to be petted. She is very nervous around other dogs except the ones that were hoarded with her on the property and can take a bit of time to warm up to them. Agatha pays no mind to cats when they are in her presence.

Agatha would do well in a home with a calm, confident dog that can show her the ropes of being a house pet with a life of leisure. She would do best in a quiet home with children past the screeching age.